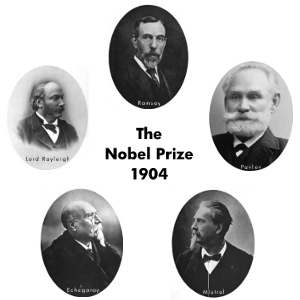 LibriVox recording of The Nobel Prize in 1904 by Various.

The Nobel Prizes are international awards bestowed once a year by Scandinavian committees for cultural and scientific advances. They were established in 1895 by the Swedish chemist Alfred Nobel, the inventor of dynamite. The prizes in Physics, Chemistry, Physiology or Medicine, Literature, and Peace were first awarded in 1901.

The Laureats of 1904 were:
Physics: Lord Rayleigh (John William Strutt, 1842 - 1919), "for his investigations of the densities of the most important gases and for his discovery of argon in connection with these studies";
Chemistry: Sir William Ramsay (1852 - 1916), "for his discovery of the inert gaseous elements in air, and his determination of their place in the periodic system";
Physiology or Medicine: Ivan Petrovich Pawlow (1849 - 1936), "in recognition of his work on the physiology of digestion, through which knowledge on vital aspects of the subject has been transformed and enlarged";
Literature: Frédéric Mistral (1830 - 1914) (one half), "in recognition of the fresh originality and true inspiration of his poetic production, which faithfully reflects the natural scenery and native spirit of his people, and, in addition, his significant work as a Provençal philologist",
and José Echegaray y Eizaguirre (1832 - 1916) (one half), "in recognition of the numerous and brilliant compositions which, in an individual and original manner, have revived the great traditions of the Spanish drama";
Peace: L'Institut de droit international (Institute of International Law), "for its efforts as an unofficial body to formulate the general principles of the science of international law.".

This multilingual collection (in French, English, German, and Spanish) contains the presentation speeches for the Laureats, their biographies, as well as the famous "Nobel lectures" for the three scientific awards. (Summary by Ava and Wikipedia)

For further information, including links to online text, reader information, RSS feeds, CD cover or other formats and languages (if available), please go to the LibriVox catalog page for this recording.

Uploaded by librivoxbooks on October 4, 2010